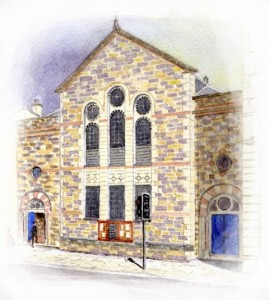 Trinity Church traces its history back to 1742, when the majority of elders and congregation of Stow left the Parish Church there and formed the original Secession Church in Gala.  In 1805 they became a formal congregation, the East United Presbyterian Church, and the first church and manse were erected in the old part of the town in 1806.  In 1884 the decision was made to move to another site in the High Street, and the present church was opened for worship in November of that year.  In 1867, the church was enlarged and a hall added, and in 1877 a new manse was built in Abbotsford Road. New church halls were built and opened in 1926, the original hall being converted into the church vestibule.

In 1962 a union was proposed between Galashiels East Church and St Mark’s Church in Kirkbrae, which was just six years short of its centenary.  The new church was called St Columba’s and worshipped in the former East Church in the High Street.

In 1977 the congregation was confronted with a further union, this time with St Andrew’s Church in Bridge Street.  This took place on the 10th March, 1977 and the united congregation worshipped in St Columba’s Church, which was renamed St Ninian’s.

In 2005 both St Aidan’s and St Ninian’s were vacant, and there was further pressure to unite.  The new church, worshipping in the church that began life as the East Church was named Trinity and what had originally been St Columba’s manse in Mossilee Road was adopted as the Manse for the united charge.

Trinity serves a population of some 6000 people, a figure almost equal to that of the other two Churches of Scotland in the town. Trinity prides itself on its inclusive approach to worship and membership. The Electoral Roll has around 425 members, and weekly worship numbers between 50 and 100.

Sunday worship is at 11.15am to allow the Minister to get back from the earlier service at Caddonfoot, about 10 minutes drive away. Worship is relevant, inclusive, and uplifting, with shafts of humour interspersed. There is a rota of readers who take it in turn to read the Bible lessons.

Communion services take place 4 times a year, at the morning service, and members of the Deaf Community from Edinburgh and the Borders attend two of these annually, together with their Minister and interpreter. A short communion service is also held jointly with Caddonfoot at 3pm on four Sundays a year. Home Communion is offered to those who request it.

There is also a weekly Bible study group which looks at the following Sunday’s lectionary readings, and their reflections are often included in the sermon preached by the minister on that Sunday.

A creche is available every Sunday and all the Safeguarding regulations are covered.

There is an active Guild with 38 members which meets once a fortnight with an interesting programme. The Guild organises three coffee mornings each year, two of which raise money for guild projects, and one for the Guild funds. 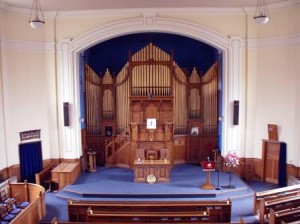 Galashiels: Trinity has a strong tradition of excellent church music, with some notable organists. The first pipe organ was installed in 1904 and was long considered a fine instrument. The present 3-manual organ was completely rebuilt by Ingrams in 1926, and the organ console sited centrally. In the 1950s, it was electrified with the console moved to the side and the choir pews removed.

In former years, there were many performances in the East Church of oratorios with a large choir including Handel’s messiah.

Today the organ is complemented by a grand piano, used regularly by the current organist.  Trinity still has an enthusiastic four-part choir of some dozen members, which sings an Introit most Sundays and puts on regular concerts and entertainments.

Galashiels is situated in the heart of the Scottish Borders, approximately 38 miles south of Edinburgh. Nestling in an area of considerable natural beauty, with literary and historical connections – Abbotsford is a mile out of the town, it has a population of some 15,000 and is the main shopping centre for the Central Borders, with Asda, Tesco, M&S Simply Food and other major retail outlets.  It has a swimming pool, extremely good sports and outdoor facilities, including Netherdale Rugby Ground, where the Gala Rugby Sevens are held each April.  It has a cinema centre, a Library, 6 primary schools, a secondary school, college and university campus.

One of the unique features about the Border towns is the Festival week held in each town in the summer.  Gala has a week of ride-outs and celebrations in June, ending in Braw Lad’s Day on the Saturday. Over the years, the town has been subject to many changes, one of which was the loss of the railway in the 1960s.  We look forward to the restoration of the line in the next few years, which will link Tweedbank with Waverley in Edinburgh, stopping at Galashiels. 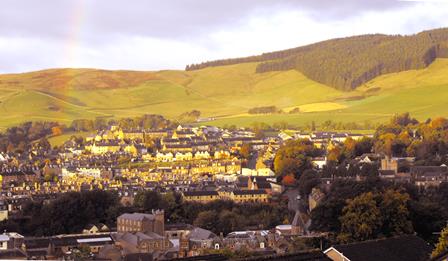 A flower committee delivers flowers to the elderly, sick or bereaved on a weekly basis. There is an active joint prayer group in operation, between our two churches and those who are being remembered are notified accordingly. All members of the group are committed to the utmost discretion regarding the information they require.

Funerals are regularly held in Trinity, although the advent of the Borders Crematorium in Melrose has reduced the number of church funeral services considerably.  Trinity remains committed to the parish for all pastoral needs.

An excellent quarterly newsletter coincides with the four communion services and is important in maintaining communication with our membership.

Regular summer coffee mornings are organized in the hall by members of the Church’s Congregational Board and are well supported by the community.

Chaplaincy of the Burgh Primary School is welcomed. Members are involved regularly in the Borders General Hospital Chaplaincy Sunday morning services and in monthly services in the Care Homes in the town. Trinity plays a key role in the town’s Annual Christian Aid collection and in the food bank.

The Christmas Christingle Service is appreciated by the whole community. Many local organisations use Trinity Hall for coffee mornings. The Galashiels Town Band holds concerts most years in the Church, and the hall is used on a regular basis by community groups, such as Taekwondo and Weightwatchers.

The Heart for Art group in Galashiels continues to grow as part of our community. 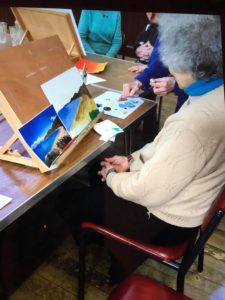 Launched in 2019 it meets every Wednesday in Trinity Parish Church hall for two hours of wonderful creativity. Heart for Art in Galashiels seeks to bring creativity and connection to those living with dementia in the local com-munity. Our free art classes cater to the individual, providing choice and support. Our community based group enables participants to realise their ideas on canvas, whether landscape, portrait, still life or abstract. Our enhanced dementia tutors and volunteers are on hand to assist with a variety of materials. 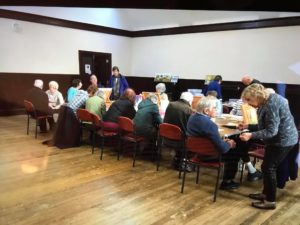 Our Galashiels group has around 7 participants attending from local care homes and the community. All our volunteers have undergone dementia training and understand the needs of those who attend our group. Whether you want to try a new sketch or simply have a cup of tea and a chat with us, we are here to support you. At Heart for Art, no art experience is needed. So many people join our groups, having done no art since school. In the right environment, everyone can feel encouraged to have a go. The diverse skills and styles of our artists is something we enjoy celebrating!